In your quest for an affordable CNC machine with metal cutting capabilities, you have likely encountered an assortment of light duty cnc routers that are equipped with spindles that can run at blisteringly fast speeds; in some cases over 26,000 RPM! That's more than triple the maximum speed of MR-1 that comes in at only 8,000 RPM. Sounds impressive, right? After all, isn't greater speed always better? Surprisingly, you’ll find that it's rarely ever the case for a metal cutting machine.

The purpose of this article is to explain why a higher speed rating is NOT inherently better and why generic 2.2kW router spindles are not a great choice for a well rounded metal cutting CNC machine. If the nitty gritty details don’t interest you, here's the short of it: the 3.4 Horsepower 0-8000 RPM AC Servo driven spindle on MR-1 has more torque, more usable power, and provides substantially more versatility in terms of the types of materials that can be machined and the tools that can be used. And it's not even close.

What it Takes to Machine Metal

The spindle motor is the heart of any CNC milling machine. Its task is to rotate the cutting tool so that it can peel chips from the workpiece. However, a spindle would be rather useless if it peeled chips at an excessively slow rate, even if they are big. Conversely, a spindle that can peel chips at a high rate would not be effective if the chips are excessively tiny. Striking an optimal balance between peeling large chips and peeling many chips over a given period of time is the goal of any machine builder in their quest for achieving the highest (MRR) possible.

It's important to note that the dynamic loads on the machine are directly proportional to the size of the chips being peeled from the workpiece. Larger chips require more cutting force and the machine structure must possess sufficient rigidity to react against these forces with as little deflection as possible. The rate at which the chips are peeled does not change the magnitude of forces experienced by the machine. A machine with a high revving spindle motor, for example, requires less structural stiffness than a machine with a low revving spindle motor given the MRR is the same. The structure of the machine is usually the largest expense, so it's easy to assume that the most affordable machine would be one that is lightly built yet equipped with a high revving low torque spindle. There are a few ‘gotchas’ with this line of thinking and they relate to the physical limitations of cutting tool technology.

Cutting tools that are used for machining metals cannot simply be run at arbitrarily high cutting speeds. That’s why you will often hear machinists talk about the importance of the magic words, ‘feeds and speeds’. Tool wear, chipping, and breakage can all occur quickly if the tool rotation speed is too high for processing a given material. For this reason, tool manufacturers publish maximum tangential speed ratings (V Speed or Vc) for each of their tools. V Speed is the linear speed of the tool cutting edge, and it is typically expressed in surface feet per minute (SFM). Because tangential speed increases with tool diameter, larger tools must be spun slower to avoid violating the maximum allowable V Speed rating. Typically the harder the material is the slower the rotation speed must be. Since the common causes of rapid tool degradation are excessive cutting speed and tool vibration, metal cutting CNC machines must be designed to make productive cuts in a wide range of materials, with large and small tools, all while keeping the tool speed below the maximum allowable V speed with excellent tool rigidity. As we said previously, lower cutting speeds require proportionally higher chip loads. Higher chip loads require more spindle torque and greater machine rigidity. 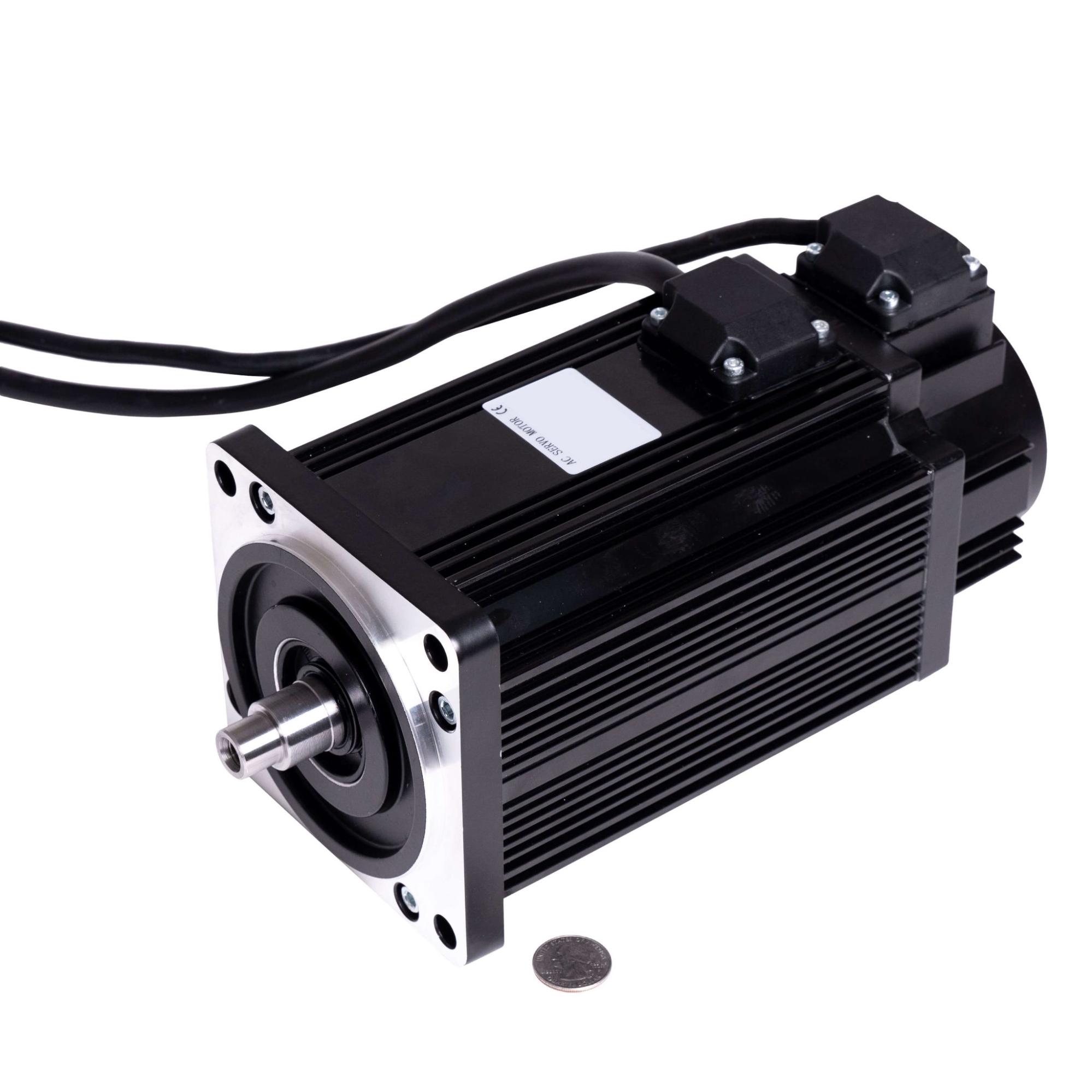 When we started developing MR-1, overall versatility was high on the list of importance. It would need to be able to machine a wide variety of materials from plastic to aluminum, all the way up to stainless and titanium.We also wanted it to have the ability to run just about any kind of cutting tool up to 2.5” in diameter. To be able to cover such a wide performance envelope would demand a spindle with excellent torque and power, while also keeping RPM high enough to yield productive MRR. If our goal was to simply build a machine that could only cut aluminum with ¼” carbide end mills or smaller, then the 2.2kW high speed spindle motor may have been a good choice. But our vision was much more ambitious. We wanted the machine to be capable of making not just those cuts in aluminum with small tools, but also have the capability to run large diameter cutting tools on harder to machine materials. Tools like facing mills, fly cutters, large diameter end mills, and boring heads must be run at painfully low speeds to not violate the published max V speed rating. And as we learned before, larger tools require greater chiploads to produce the same MRR. All of which demands a spindle motor with higher torque.

The common 2.2kW spindle motor has a maximum speed of 24,000 RPM. Since speed control of these motors is accomplished by varying the input frequency (VFD), maximum torque occurs at maximum speed and decreases with speed. In short, the motor exerts less torque at 20,000 RPM than it does at 24,000. Unfortunately, there exists a lower threshold speed where torque becomes so low that the spindle motor will stall. This speed varies by manufacturer but is usually about 12,000 RPM. This means that these spindles cannot be reliably used for machining below 12,000 RPM because they can stall with almost no load.

Now let's look at the MR-1 spindle motor more closely. It is an AC Servo Motor that runs on 220V single phase power (can be run on 110V outlet power by purchasing our 120V:220V Transformer option). The great thing about these motors is that they have a flat torque curve meaning that at any operating speed the torque is constant at about 4.5 ft-lb. You can run the spindle from 0 RPM all the way up to 8000 RPM and the chip peeling capabilities will be exactly the same. In addition, since the MR-1 motor is a true servo, it has excellent speed feedback due to the fact that the encoder speed is constantly being monitored by the sophisticated motor controller. This means that as the tool starts seeing an increased load, the motor controller will increase current to the motor in order to maintain peak torque. What this all boils down to is that since the MR-1 spindle motor produces its power at much lower speeds, it boasts a peak torque rating that is 3 times higher than the 2.2kW router spindle motor.

Now that we understand the basics, let's look at a real world example. Imagine we are building a prototype assembly which requires parts to be made out of aluminum, steel, and stainless. The parts will require a ½” end mill, ⅜” HSS drill bit, and a 2.25” carbide fly cutter. The tables below show the maximum allowable V speed and RPM for each tool.

If MR-1 was equipped with a 2.2kW router spindle, the only operation that could feasibly be completed on this list would be the ½” carbide end mill on aluminum. Recall that the lower RPM limit of the router spindle is approximately 12,000 RPM so the torque available would be so low that only the smallest chip load could be used before stalling occurred. Of course the tool could be spun faster than the maximum, but the rapid tool degradation would cause short tool life and resulting increases in tooling expenses. Not to mention that to use a ½” end mill in aluminum requires serious rigidity to cut effectively. All of the other cuts on this list require tool RPMs that are substantially lower than the minimum speed of the 2.2kW router spindle meaning that the hypothetical assembly could not be built.

You’ll notice that every single operation on this list could be completed by MR-1, and we have performed these exact cuts many times. In only one case (the ½” carbide end mill aluminum) is the maximum allowable rpm not achieved. But remember, there is no penalty for running a tool at a slower speed than the max limit.

Turning our attention to the steel and stainless examples, you’ll note that the required RPM is extremely low. To make matters more challenging, steel and stainless require particularly high torque to peel off productively large chips. This is really where the AC servo motor shines because there is no drop off in torque at slower speeds. Because the machine structure has substantial rigidity, all of the available spindle torque can be used effectively.

We spent the better part of a year surveying all the available spindle motor options that could work on MR-1 and at the end of the day the choice was clear. We believe that our 3.4 HP AC servo motor is perfectly tuned to the rigidity of MR-1, and it gives the machine the versatility to run both High Speed Steel and Carbide cutting tools on virtually any metal. With material removal rates (MRR) of up to 10 cubic inches per minute in aluminum and 3 in steel, we believe that MR-1 is the best machine in its price class for machining parts at a productive pace.